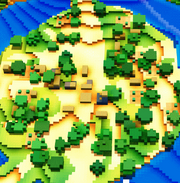 An undiscovered city as viewed on the map.

Every Biome/Region has at least two Villages, sometimes three. Villages offer many facilities like diffrent Crafting stations. Various equipment and weapons can be bought in the shops. You can also find Side Missions and tamable animals in villages. Different styles of villages appear in different biomes.

Unlike in the alpha version, crafting buildings can be found anywhere around the city center. Buildings here include the Clothier, the Smithy and the Workshop.

There is a hidden crafting level (also region bound) but it allows you to recieve 3 or 4 cubes out of a single nugget, cobweb, cotton or log each time you refine a material.

Players can create Armour for Rogues, Rangers and Mages at the Clothier.

The Loom further turns the Yarns into Armour. There are however, some other uses for the yarns.

The Smithy is used for crafting with metals like Silver, Gold and Iron various items.

The Furnace is used to smelt Nuggets into 1-4 of their respective Cubes (Iron, Silver, Gold). The Nuggets can be further crafted into other items.

Players can turn Metal Cubes (sometimes along with some other items) into Amulets, Rings, Iron Armor and Weapons.

The Customization Bench is one of the more unique features of Cube World. It allows players to customize Weapons cube by cube, making them stronger (Bonus Dmg.) as well as changing their look.

This building's use is crafting various wood weapons.

The Saw's only use is turning Wood Logs into 1-4 Wood Cubes.

A player can use Wood Cubes (with other items) to create Greatmaces, Wood Wands, Staves, Bows, Crossbows and Boomerangs

This is the replacement for the class trainers, see this NPCs to switch your Specialisation.

Collies, Cats, Sheep, Terriers and Pigs can be found in a city. All the Pet Foods needed to tame them can be bought in Town, except for Pumpkin Mash (needs verification).

Similarly to crafting stations, vendors can be found anywhere around the center of a city. Unlike the alpha version, vendors have limited inventory. Additionally, some items, like pet food from the Item Shop, can change when restocked. Vendor stock refreshes every in-game day.

The Vendor here sells Bombs, Pet Food, Glass Flasks, and Sugar. The vendor will only sell one type of pet food at a time and which food he sells can be cycled by purchasing the current food and waiting a day.

The Armor Shop sells Armor for the four Classes. Higher rarity Armor and an overall increase in available armor sold can be achieved by the Side Missions to save the Gnome Supplier.

The Vendor in this Shop will sell Weapons to adventureres of all classes, though, like the Armor Shop, not for every level.

The Identifier can identify Leftovers for a small price, depending on their rarity. Leftovers can yield an item one tier rarer than the Leftovers. Leftovers are bound to a region and will yield gear bound to that same region, even if identified elsewhere.

Cities often have decorations with no purpose. They only have esthetic uses, and, as of the beta release, can no longer be interacted with.

Inns are scattered throughout all Cities and provide beds to regenerate HP and make time go faster. Talking to the innkeeper between 6:00PM and 6:00AM will make it 7:00 in the morning for a cost of 10 coins.