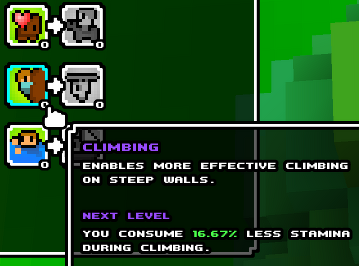 Climbing is an ability available to all four character classes.

This climbing ability allows the character to climb up the vertical surface you're facing. It is possible to move sideways while climbing, and to switch to an adjacent vertical surface, but not over any horizontal barriers. This means you cannot climb past an overhang at the top of a cliff or structure, or protruding features of a rocky surface.

If the climbing ability hotkey (default 'Ctrl') is held down but no movement key is pressed, the character will continue hugging on to the surface it is climbing but the stamina drain will stop. This allows players a brief respite to consider their next moves, instead of being pressured to rush a difficult climb in one go.

It is possible to jump and then grab onto a vertical surface. Similarly, falls below a certain speed (height?) can be halted by grabbing onto something. However, while in the middle of a climb it is not possible to push off into a jump, only to let go and fall.

It has no prerequisites. 5 points in Climbing will unlock the ability above it, Hang Gliding. 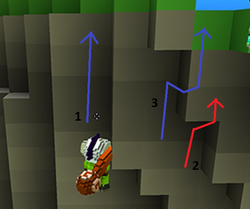 1. The first is a valid climbing path, indicated by the blue line. It is a straight climb up one vertical surface.

2. The second is an invalid climbing path, because it attempts to "climb outwards". Note how the character's head will hit a "ceiling".

3. The third climbing path is a workaround to accomplish what #2 tried but failed. Instead of hitting a ceiling, the character merely goes sideways to an adjacent vertical surface, which is allowed. At no time does the character try to push its head up through something above it.