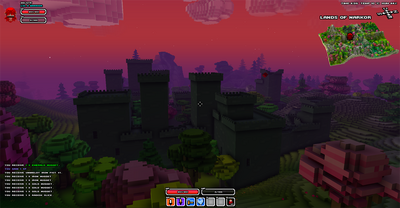 "Dungeons are really dangerous places. Don't forget to take some potions with you."

A Dungeon is a procedurally-generated named Landmark in Cube World. It can consist of either artificial structures or be formed from naturally occurring terrain.

Dungeons created as artificial structures typically consist of a largely linear route with a single dead end, although there may be occasional shorter forks before it. As expected of artificial structures, these type of dungeons often sport features such as spike traps, incomplete stairs (forcing player characters to climb the stairwell walls to return, which may be impossible for characters without increased Climbing ability), and reduced lighting (occasionally to the point of pitch blackness). On the other hand, there is also the possibility of finding loot simply by shattering vases and opening chests - sometimes there are even loose items sitting on tables and other furniture. 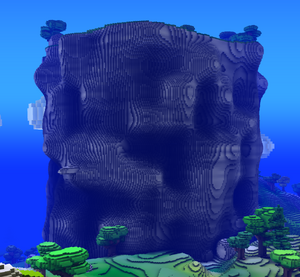 The monsters populating a dungeon can spawn at a uniform higher level than monsters elsewhere in the current Landscape. Dungeon-based monsters are also almost exclusively encountered in groups of 2-4 rather than as solitary individuals, and some of these groups will be found standing stationary guard at certain spots rather than patrolling like other monsters. Ogres are also often used as guards in dungeons and rather than being the default, their level adapts to that of their dungeon.

Finally, at the end of the path of an indoor dungeon (or close to the center of the area of an outdoor one) a Boss will be laying in wait. This will always happen if the Dungeon is a Mission and only sometimes if it is not.

Currently, the only type of trap is the Spike Trap. It comes out of the ground every few seconds and deals damage. Some Dungeons have many Spike Traps near each other that activate consecutively and present a greater challenge. At higher levels, Spike Traps take millions of health points. This is most likely a glitch.

There are different traps coming in the next update. While only one of them is shown on Wollay's Instagram, he said that there will be more than that. The Trap in the Video consists of a tree trunk that, once every few seconds, drops on the floor and is lifted back up again. It also seems that it will kill the player no matter their HP.