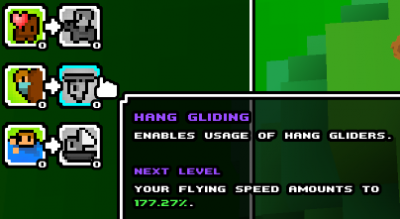 Hang Gliding is an item.

The Hang Glider is a Special Item.

It allows the player character to glide downwards instead of simply plummeting to the ground or gain altitude with the cost of Stamina.

While adventuring, pressing the special item hotkey (default 'E') allows the player to bring out (or put away) the equipped hang glider.

Once airborne the hang glider will slowly sink to the ground, at an increasingly faster rate. Pressing spacebar (to jump) while in mid-flight will temporarily halt this descent by leveling off the flight angle. Doing so consumes stamina, however, and when the player runs out of stamina it will be impossible to stop the descent any longer. If the downward rate is not arrested, the hang glider will eventually bank and turn into an increasingly steeper spiral.

If the player crashes into anything while airborne (or simply brushes up against anything), a brief dizzy period will occur and the player will fall to the ground because the hang glider will be automatically toggled off. While the impact and dizzy itself merely temporarily incapacitates the character without causing damage, the subsequent fall will still inflict injury if far enough. Again, when this occurs the player cannot simply re-enable the hang glider.

To guarantee a safe landing without the risk of somehow triggering a crash, simply dismiss the hang glider just before hitting the landing surface. Enterprising mages can use their Teleport spell or their floating ability to ensure a safe landing.