Plants are items in Cube World.

Plants are often sources of raw material used in Crafting.

Heartflowers are small, 4 leafed plants with a red heart-shaped flower. They are used to make Life Potions, which are efficient in combat, much more than normal Food is. They are common in most biomes with some exceptions and can be picked up from the ground. Another way of obtaining Heartflowers is by melting Ice Flowers, obtaining 1-3 Heart Flowers by doing so.

Iceflowers are the Snowland variant of Heartflowers. Their red, heart-shaped flower is encased in ice and can be used to make Heartflowers. It currently has no use in-game other then that.

Ginseng is a plant which can be commonly found in the Greenlands. It drops 1-3 Ginseng Roots when destroyed, which can be used to make Ginseng Soup at a Campfire.

The Cotton Plant is useful mainly to rogues, as it can be turned into Cotton Yarns and into Cotton Armour and Fists. It has a tall green stem which ends in the Cotton Ball. It yields 1-3 Cotton Balls which can be sold for 2 Copper Coins.

Mushrooms are common purple fungi with yellow spots. They are considered items and can therefore be picked up. Together with one Onion Slice, Mushroom Spit can be made, the best healing food in the game. They spawn in places with a lot of vegetation like Greenlands or Jungles. Mushroom Lands are planned biomes where Mushrooms will most likely be abundant. 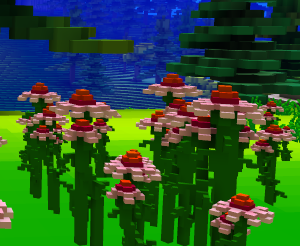 Shimmer Mushrooms have no purpose other than being a constant stationary light. They have a different shape from normal Mushrooms, they are blue and emit light on small radius. They can only be found in caves.

Scrubs consist of a small two-branched sapling with a few leaves and a spider web. The Web can be turned into Silk and into Silk Armour, only useable by mages. They are somewhat common plant and spawn as often as Cotton Plants and Bushes. The Desert Scrub looks like a dead Bush and drops Wood Logs and Plant Fiber.

The Bush is useful to Rangers and Mages, because it gives Plant Fiber for Linen Yarns, which turned into Linen Armour or used as strings for Bows and Crossbows and Wood Logs, useful to both Ranger and Mage for weapon crafting. They appear in any biome with large amounts of Vegetation and has a Snowland variant, which is white instead of green but drops the same items. 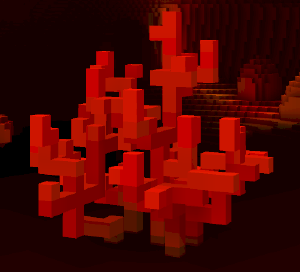 The Fire Shrub is a Bush native to the Lavalands. It offers the same loot as a Bush and looks like a red Desert Scrub.

Cacti are large Desert plants which drop Prickly Pears, used for making Cactus Potions, which heal very slowly give a lot of HP.