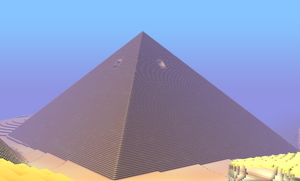 Pyramids are the most iconic Dungeon for the Desert, but it can also spawn in the Lava lands. Its structure is similar to that of the Temple, and the biggest similarity is the Shape. Another similarity is that the only entrance is at the top.

They use the following naming schemes:

Ancient Guardians are the most common monsters you can find in a Pyramid. They have the same purpose as Undeads in Catacombs. There are two variants of the Ancient Guardian: one of them has a black beak, white face and the other one has a black, coyote like face.

Djinns are the more powerful guards of the Ruins. They can summon Green Slimes and create Fire Explosions. Usually, they will walk around in a room with at least one Black Cat, with a chance of being followed by Mosquitos.

They serve the same role as a Djinn, except that they lack its abilities. They will often be followed by the same mobs as a Djinn.

Cats are used by both Djinns and Skeletons as Guardians.

Mosquitos will also follow Djinns and Skeletons but seem to be more common than Cats.