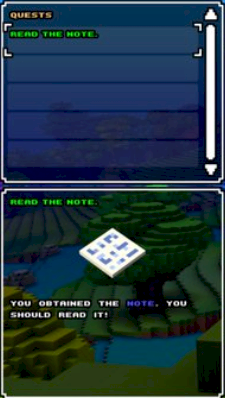 An example of a Quest Log. It tells the Player to read a Note dropped by a Boss.

Quests will be the main and the biggest feature of Cube World. Wollay tweeted many Images and Videos about Quests, which are not yet implemented. Quests, unlike current Missions, do not only consist of defeating enemies and Bosses. They can consist of finding specific Mobs, finding an Item for an NPC, release an NPC and more. Quests are complex and have many "stages". An example would be defeating a Boss, then getting a note which tells the player where to find an Amulet, which, when found, is brought to an NPC. Quests have different rarities, each represented by the same colors as Equipment Rarities