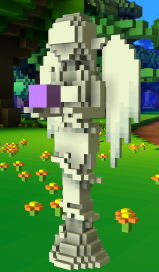 Resurrection Statues are used for Reviving after being defeated in Combat. After the Player's HP reaches 0, they can press R to be brought to a random Statue nearby. Note that if you die near a Resurrection Statue, you will not respawn at it.

Resurrection Statues look like an Angel holding a purple cube. The design of the Statue looks nothing like any of the NPCs currently in the game. There are, however, planned NPCs with different proportions from the NPCs now.