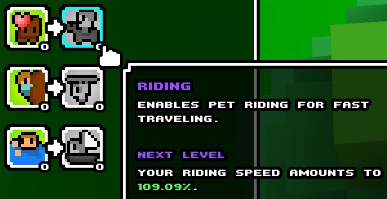 Riding is a mechanic in Cube World.

In the Alpha version of Cube World, riding was an ability now it's based off of finding reins in every zone. Once the key item Reins has been found, players will be able to press "T" to ride their pet if it is rideable.

To ride the current active pet (i.e. placed in the Pet Slot), face the pet and press the Interact hotkey (default "R").

To dismount from a pet, perform any attack - this does mean combat cannot be sustained while riding a pet, thus ruling out drive-by shootings (unless you quickly remount the pet after each attack). Performing a dodge will also cause the character to dismount, as does falling from high enough to suffer fall damage, climbing any surface, or activating a Special Item (currently either a Boat or Hang Glider).

Riding a pet slowly depletes its thirst meter, indicated by the droplets under the pet HP and XP bars. Once a pet's thirst meter is empty, it can no longer be ridden. To refill the meter simply bring the pet into water for a few moments to let it drink and refill the meter. The water depth is irrelevant, swimming underwater in an ocean or standing on a puddle will both refill the meter.

A pet will still follow you and attack enemies when its thirst meter is empty - it is solely an indicator for how long you may continue riding the pet.

Riding was previously an ability available to all four character classes. It allows players to ride any of their Pets which are categorized as mountable. Each skill point invested in riding increases the speed of all mountable pets by a certain percentage (movespeed = X%). 5 points in Pet Master are required to unlock this ability.