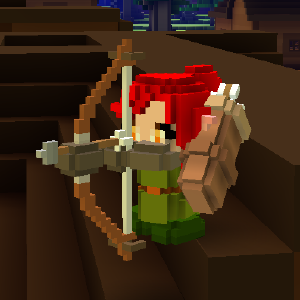 The Ranger is one of the four currently playable classes in Cube World.

Rangers are a ranged class that can use bows, crossbows and boomerangs to attack their enemies from a distance. Their specializations are Sniper and Scout. They can wear Linen and Medium Armor.

Rangers can choose between the Sniper and Scout specializations.

Rangers used to have four exclusive skills that could be unlocked via leveling and spending skill points towards the Ranger skill tree; two of these skills were specific to the Player's specialization. As skills were unlocked, they would automatically be placed in the Player's hotbar where they could be activated by pressing the 1, 2, 3, and 4 keys.

With the new full release, the Rangers skills have increased to six, though they are divided into three per specialization. The four ols skills where kept with the full release although altered and mostly buffed compared to how they used to work. The only one that had a major change was the skill Scout's Swiftness. It used to be a time based skill that increased the speed of every action the player would do e.g. faster riding speed, faster attack speed, faster hang gliding speed etc.(crafting, falling and skill recharge speed was not affected), the altered and new version of this skill is now Sprint, which only affects movement speed and jumping height at the cost of stamina instead of a 10 second period of super fast actions and a long recharge timer.

The Ranger's skills are as follows: