Spirit Cubes ( often refered to as "Spirits" ) are special types of cubes. 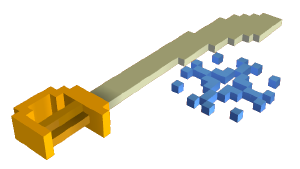 A Legendary Sword with Ice Spirits added to it to form a snowflake.

Spirit Cubes are used for upgrading weapons, by placing them on the equipment. This is done at the customization bench, in the same way as normal cubes. Spirit Cubes also have power levels, and they can only be applied to Weapons with a power level at least equal to that of the cube and at most 10 power levels higher. Whenever a special attack hits its target, the spirits cause an explosion of the same color. The maximum amount of Spirit Cubes a Weapon can have is 32. Removing Spirit Cubes is done by dragging them outside the Customization Bench interface, destroying them in the process.

Weapons with Fire Spirits applied to them will do more damage then they would normally do.

Air Spirits applied to Weapons increase the user's attack and walk speed for every hit added to their Combo. When the Combo is reset, so is the speed effect. 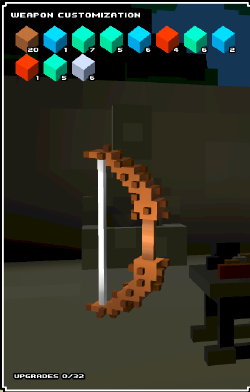 Spirits being applied to a Bow.

The Ice Spirit turns targets blue, slowing their attack and walk speed down.

With every special attack, Weapons with Unholy Spirits drain HP, and the amount of HP drained increases with the Combo.

The fact that Spirit Cubes appear on Weapons make them a possible Decoration.

Currently, the only way to obtain Spirit Cubes is to defeat Bosses, which will yield one Cube.