You characters abilities are influenced by stats. These stats can be affected by your level and equipped items.

A player can have 0 HP and still be alive, and will only die if they receive any damage. This is not a bug, but is actually a rounding 'error' that can be a cause for confusion. The value shown for the player's HP is a value that has been rounded to the nearest whole number so if the player has < 0.5 HP it will be shown as 0. 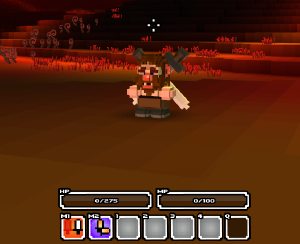 An image with a dwarf who has 0 HP but is still alive.
Retrieved from "https://cubeworld.gamepedia.com/index.php?title=Stats&oldid=14704"
Category: