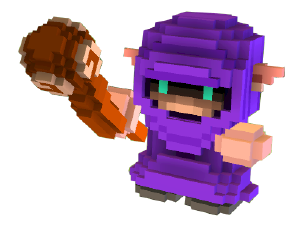 A Wizard wielding a Staff.

The Staff is a weapon category used by Mages, Witches and Wizards. Similarly to Wands, Staves do multiple hits per attack. Unlike Wands, Staves only need one hit per attack to land to keep the combo counter. Staves also have the unique ability to restore a large amount of mana when a primary attack (Fire Swirl or Water Swirl) hits an enemy, allowing for more ability use.

Staves are crafted at the Workbench using Wood Cubes, along with one or more Gemstones, depending on their Rarity

Staves, unlike Wands, which have a much simpler design, have their ends decorated with different patterns like Swirls (reminiscent of their attacks) or even supports for colored orbs and cubes, which can sometimes levitate. Common Staves often have branches with leaves on them, indicating they were made in a rush and from branches, unlike the higher tier ones.