The Warrior is one of four playable classes in Cube World.

You start with a heavy weapon that takes a while to swing but hits hard and has a 3 hit combo. A down swing that takes a second to happen, a poke for less damage then an upswing that has a chance to KO. But I suggest using dual one handed or shield and sword as they hit faster and so build your attack speed quicker.

Warriors can choose between Berserker and Guardian. 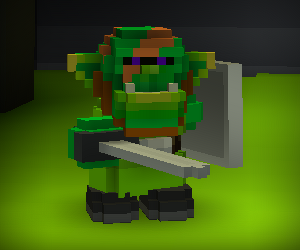 The Berserker suffers maybe a bit more than your rogue, ranger or mage at first. Given that you need to be able to get in there to deal damage to get "fired up" but he lacks as many of the ranged or surprise/skill benefits of other classes to cheese mobs who are out of his league as if he's in range to attack, they're in range to attack you. So choose your fights carefully, and consider using a shield so you can get the extra layer of using your charge attack to block attacks at least at first until you get some survivability, then you can switch to some dualswords and just count on getting Battle fury activated to live, tank and kill at the same time while having a jolly good time. A rock fist out and a spin jump over the nearest obstacle and a potion also works too.