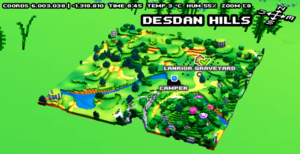 An example of the world map.

The World Map is a zoom-able and rotatable 3D voxel map, where players can plan which areas to explorations and look for missions.

Depending on the zoom level, different features will be displayed on the map. At the closest levels the World Map shows the actual game terrain in miniature, while at further levels it is useful in locating distant landmarks.

Other items visible on the World Map include indicators such as for players (displayed by their heads), quests (displayed as a set of crossed swords). Dungeons such as Ruins and Castles appear has Named Landmarks instead of having an icon, and can be seen directly in miniature if zoomed in closely enough.

When closed, the Mini-map will update to reflect the last zoom level of the world map.

The character may also continue moving while the map is open.

Biome border between a Greenlands and an Ocean.

Borders are dotted lines shown on the world map and mini-map which signify the presence of a different country/biome. Borders in undiscovered territory appear as elevations on the world map, and can also be identified by the slight change in the blue unexplored color (each area is a uniform blue shade).

These borders are merely conceptual constructs, and are not actually present in the game world. Finally, there are no "artificial" borders, i.e. there are no invisible barriers preventing players from scaling the highest peaks or the lowest ocean depths. 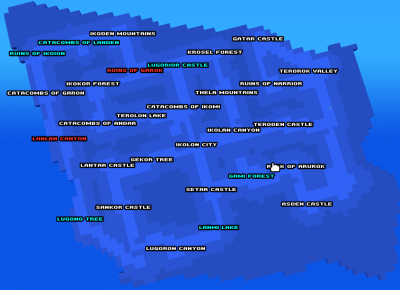 Landmarks on a zoomed-out world map.

Landmarks are Named Locations displayed on the World Map. In this image you can also see a trail of lighter-colored blue (with slightly darker edges), indicating the actual screens that the player has traveled through, compared to the unexplored darker blue.

The color of the landmark shows the power level of the Monsters in it compared to that of the player character:

One of the main feature of Cube World is the random world generator. In contrast to many games, Cube World's worlds are not pre-designed in a level designer, but generated procedurally by the game. The result is an endless world (nearly endless, i.e. there are no borders to reach), so players can explore new landscapes all the time.

During world generation the player creates a specific world by entering a unique number, called the Game Seed. Using the same game seed number results in exactly the same world being created every time, so players can share their worlds with friends by telling them the seed numbers.

Terrain is generated on the fly while playing, so there are neither long pre-computations nor huge save files at the beginning - although immediately after loading a game the player will see the game building the landscape around the character, pushing back the fog of unexplored territory as it does so.