Deserts is a biome landscape in Cube World.

Deserts have a hot and dry climate with sandy dunes, pyramids, lava lakes, and oases. The main difference from most other landscapes is the lack of vegetation. Desert Onionlings, the Desert counterpart of Onionlings live here, along with Fire Beetles and Devourers. The occasional Mosquitos and Midges can also be found and aggressive Nomads wander the landscape. Camels spawn in groups and can be tamed for faster traveling. 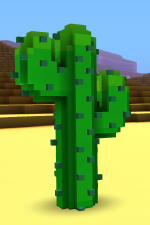 Cacti are plants found occasionally in the Desert. They yield 1-3 Prickly Pears, which are useful in making the slow but healing Cactus Potion. They can be seen as the Desert counterpart of Heartflowers, with some exceptions: they are not items, they drop 1-3 Prickly Pears, which means more potions. They are also easier to find because they stand out in the landscape.

There is a variant of a scrub that can only be found here and looks like a bush without leaves. It has two variants, brown or lime, but the drops are the same as those of a Bush: up to two Logs and three Plant Fibers. While its name suggests it drops the same items as a normal Scrub, there are no ways of getting silk in the Desert.

The Heartflower can only be found in Oases, much like in the Grasslands. Visit Heartflower page for more info about the plant.

Normal Mushrooms can also be found in Oases. Visit Mushroom page for more info about the fungus.

Palm Trees are the only type of trees that spawn in the Desert. They will spawn near rivers and oases and replace the normal trees in Desert and Lavalands Cities. Since NPCs and Mobs don't normally get up them, they're a good spot for letting the game open.

Reeds spawn in shallow water(less than one block deep) in large groups, and in every biome except Lavalands, where there is no water and Snowlands, where it is too cold for them. Because Water can only be found in Oases, Reeds only spawn there.

Lily Pads spawn in deeper water in mass. Some of them will have flowers but currently they only have esthetic purposes.

Desert Plants are the only ambiental plant exclusive to the Desert. They grow long stems and end in a white flower. The plant looks similar to a Cotton Plant. 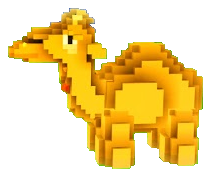 The Habanero is the desert version of the radishling. Unlike the typical Radishling, Habaneros lack a baby form or a unique drop.

The Desert Onionlings are the withered Desert variant of the Onionlings. They spawn in groups similarly to common Onionlings but are exclusive to the Desert.

Desert Runners are the Desert Variant of the normal Plain Runner and they can be tamed with Caramel Chocolate Bars. They, like all Biome-specific Runners, do not spawn in groups. This Runner's color palette makes it blend in with the landscape.

Nomads wander the Deserts and attack any Friendly mobs they meet. They can be any class but do not wear any kind of armor. Despite their relatively high Lvl, Nomads can be killed easily because they don't wear any type of armor.

Fire Beetles reside in Deserts and Lavalands. They have the exact same behavior as the Bark and Lemon Beetle, except that they are only found in two landscapes.

Bats will spawn in caves like they do in any other biome. Their behavior is not different from other bats'.

Probably the most iconic mob for the Deserts, Camels are aggressive mobs that spawn in groups most of the time. They can be tamed and can be ridden for fast travelling.

Porcupines are spiky creatures that, despite the stings on its back, can be ridden without any damage.

Sand Horrors are aggressive Sand Whirlwind creatures who wander the landscape in groups or alone. They use their fists to quickly damage the player.

Ancient Guardians are aggressive mobs commonly found in Pyramid Dungeons. There are two varieties of this mob: Anubis and Horus, only with visual differences. These mobs are often followed by Mosquitos and Black Cats. 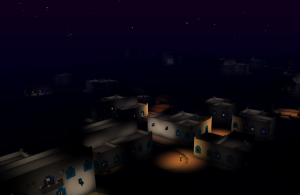 Cities in the Desert look different from normal ones. They use torches for lighting and the houses follow a Greek style palette, pattern and shape. Also, fields do not exist in these cities. While the fences are there, there is no terrain for crops.

Oases are the only place besides Wells to find Water in this biome. They're also a good place to find Heartflowers and Mushrooms. Besides that, many mobs spawn in/near Oases, so they're a good place to earn XP or tame mobs.

Pyramids are massive Dungeons that resemble the Deserts best. Their entrance is at the top and a spiral staircase leads into a large room. After going down the large staircase, you will enter the first room of the Dungeon. Pyramids are the Desert variant of the Temples.

Ruins also look different in the Deserts. They are composed of more buildings, have palm trees, their color matches the sand and now they are guarded by Djinns and Nomads. If the Ruins have a Boss, the Boss will be a Nomad and will stay in a normal Greek Ruin, like those from the Greenlands. Note that it's possible to find Ruins which contain only a few buildings.

Forests can also appear in the Deserts, and they consist of normal Trees and Pine Trees. The border is composed of Palm Trees. When entering a Forest, the color of the sky changes, suggesting that it's considered a different Biome from the Desert.